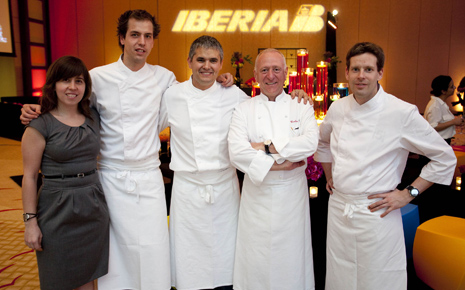 Jubany´s team is back from Miami, where they participated this week in the opening of the new flight from Iberia that links Barcelona to Miami. On Wednesday, the Mandarin Oriental Hotel took in the opening dinner party of the airline, with a special cocktail dinner with ingredients and flavors from the catalan gastronomy, in charge were Nandu Jubany and Carles Gaig. Around 150 people assisted to the event and between them were travel agency managers, tour operators, reporters and VIP clients from the company. The menu, created for the ocassion, included "coca" bread with tomato and "llangonissa" from Vic, codfish fritters, spring onions with romesco sauce, green peas simmered in foie gras, shrimp "suquet", codfish "a la llauna", and "escalivada" with anchovies and black olives olive oil. During the dinner there was also a rice buffet were they served two different paella style rice, rice with "espardenyes" and rice with pigeon, artichokes and porcini mushrooms. At the teppanyaki buffet Nandu prepared "pa amb tomaquet" and iberic ham omelette as well as beef and foie gras burger. For dessert guests sampled wind fritters, Nandu´s burnt crema catalana and the more modern version by Gaig, crema catalana in a cup.