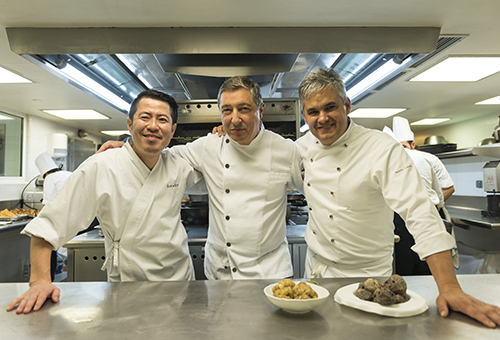 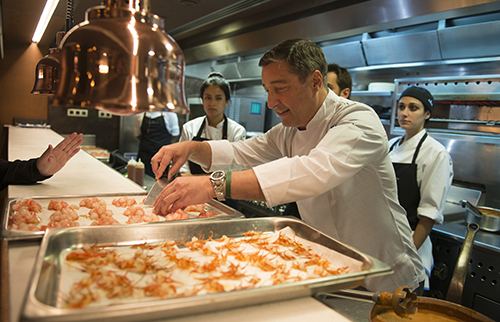 Success of the three cooks’ dinner by Joan Roca, Hideki Matsuhisa and Nandu Jubany in Andorra

On November 29, the Sport Hotel Hermitage & Spa d’Andorra was the backdrop of a celebration dinner for the 10th anniversary of the establishment, made by the cooks Joan Roca, from the Celler de Can Roca, Hideki Matsuhisa, from Koy Shunka, and Nandu Jubany, from Can Jubany. Click here to see the dinner video.

The dinner, to which 150 people attended, began with a cocktail at the Glassbar 1850 with a showcooking of the three cooks. Then, dinner was served at the restaurant Origen.

Each of the cooks presented an assortment of appetizers. At the table, Joan Roca prepared prawn marinated in rice vinager and citruses, gravy of the head, crunchy legs and algae velouté. Hideki Matsuhisa presented a creamy rice with smoked eel from Ebro Delta. As for Nandu Jubany, he served a Bone Marrow with beef tartare and tartufo bianco from Piemonte.

Joan Roca highlighted that "it was a pleasure to cook with friends like Nandu and Hideki, and a luxury to cook in the premises of an hotel such as the Hermitage in Andorra, one of the best mountain hotels I know. It has been a satisfying and as well inspiring experience. Cooking with other cooks is always an opportunity to learn new things."

As far as he is concerned, Hideki Matsuhisa thanked the hotel for “its hospitality for what will be the third season of the Koy Hermitage. I couldn’t think of a better way to begin the season than this dinner. It is a privilege to work with two of the most relevant personalities of the current gastronomy, Joan Roca and Nandu Jubany, with both of whom, moreover, I have a great friendship".

Nandu Jubany expressed his satisfaction to share kitchens with Roca and Matsuhisa. “Beyond the fact of cooking together with these two great cooks, I have cooked with two great friends. It has been an incredible experience, at the level an hotel such as the Hermitage deserves”.

For 5 years already, Nandu Jubany has been managing the gastronomy of the Sport Hotel Hermitage & Spa, together with the hotel team. Among the different gastronomic places of the house, Origen is to be highlighted, which is the gastronomic restaurant of the hotel, that during the winter season lives with a gastronomic second managed by Hideki Matsuhisa: Koy Hermitage.